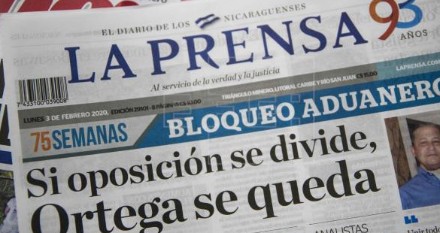 “We call on Ortega to promptly release the La Prensa executives he has detained, stop his other efforts to block publication of this storied newspaper and halt his broader repression of Nicaraguan journalism,” said National Press Club President Lisa Nicole Matthews and National Press Club Journalism Institute President Angela Greiling Keane. “Journalists in the United States and beyond are watching out for press freedom in Nicaragua.”

One week ago, Ortega sent police to raid the offices of La Prensa, a 95-year-old paper. During the raid, the police ejected employees from the office, seized materials and arrested Juan Holmann Chamorro, the paper’s general manager, on charges, including money laundering, that independent press-freedom groups say are unfounded.

The executive has been denied contact with attorneys and family members, as have nearly three dozen other Nicaraguans, including journalists and others, who have been detained just since June, said Dagmar Thiel, CEO of Fundamedios, a group that advocates for press freedom in Latin America.

La Prensa has been forced to halt its print publication due largely to a government-imposed ban on newspaper ink. Employees have yet to return to their offices. It is unclear how much longer the paper can continue to publish digitally.

“La Prensa has courageously withstood government assaults for nearly a century, including the assassination of its editor in 1978,” Matthews and Greiling Keane said. “Now La Prensa faces one of its most dire challenges yet.”

The National Press Club will hold a press conference on Aug. 31 at 10am to hear directly from Nicaraguan journalists. Besides La Prensa, Nicaragua’s reporters generally face what Reporters Without Borders has called “a nightmare of censorship, intimidation and threats.”

Journalists in that country are “constantly stigmatised and subjected to harassment campaigns, arbitrary arrest and death threats,” the group says on its web site.

Founded in 1908, the National Press Club is the world’s leading professional organization for journalists. The Club has 3,000 members representing nearly every major news organization and is a leading voice for press freedom in the United States and around the world.

The National Press Club Journalism Institute, the Club’s non-profit affiliate, promotes an engaged global citizenry through an independent and free press and equips journalists with skills and standards to inform the public in ways that inspire civic engagement.