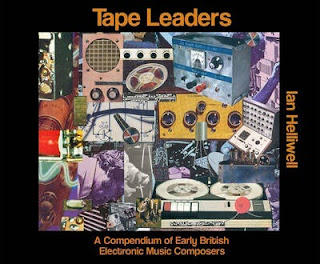 Tape Leaders: A Compendium Of Early British Electronic Music Composers is a richly illustrated A-Z compendium featuring over 100 composers active with tape and electronics in the analogue era. Containing information never previously uncovered, it shines a fresh light on many sound experimenters unacknowledged in the history of British electronic music.

With an individual entry for each composer, it covers everyone from famous names like William Burroughs, Brian Eno and Joe Meek to the ultra-obscure such as Roy Cooper, Donald Henshilwood and Edgar Vetter. There are sections for EMS and the BBC Radiophonic Workshop and amateurs, groups and ensembles that experimented with electronics, including The Beatles, Hawkwind and White Noise.

First published by Sound On Sound Magazine in 2016, this is the first time it’s been available outside their shop and this new edition has been extensively revised and updated. The hardback book is 22.7cm x 17.7cm landscape, and the 224 pages are printed and bound on heavyweight 130gsm paper. With a specially compiled 15 track CD of mainly unreleased early British tape and synthesizer works (exclusively available to the Velocity Press shop and free with all pre-orders), this is an essential book for anyone interested in electronic music history during the 1950s and 60s.

Practical Electronica, it was evident there was so much early British electronic music that had never been properly researched. The idea of a book examining this formative period began to crystallise during work on the film, as interesting facts were being uncovered that fed into a much broader-based history than has ever been available. A compendium to cover not just the acknowledged figures, but also those that never get a mention, was the objective so that famous names sit alongside the unknowns, and the reader gets a sense of the vast amount of electronic music activity that was going on, which has since been ignored or forgotten about.

“The graphic design was another important consideration and has been something of a labour of love to evoke the era of tape recorders, tone generators and analogue synthesisers. Many of the photos and images have come directly from the featured composers or their families, and form an eye-catching array of illustrations to support and enhance the text."

--Ian Helliwell: "Years before investigating the work of FC Judd for the documentary

Tape Leaders isn’t out until October 2021 but if you pre-order it from velocitypress.uk you’ll receive it in September, signed by the author and with an exclusive free CD.
Read more global news here
Read about arts and cultures here
Read Technology Today digital magazine here
Art History Featured Music News UK