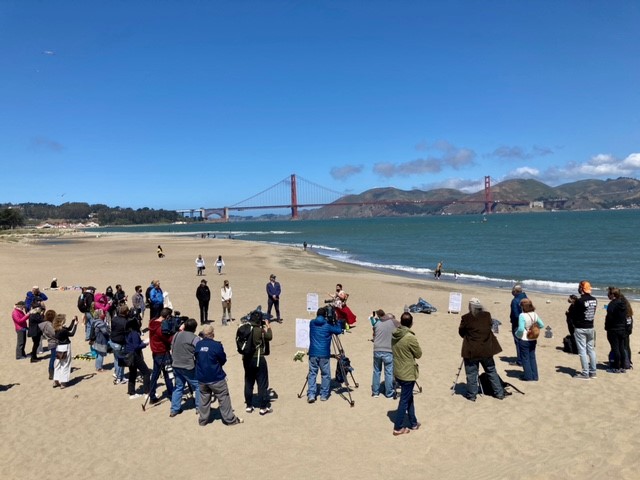 Turtle Island Restoration Network joined conservation groups and whale lovers at Crissy Field Beach in San Francisco to honor the 12 dead whales that have washed up in the Bay Area so far this year and call for greater protections. Attendees took actions calling for specific solutions to the three top threats to whales: ship strikes, entanglement in fishing gear and climate change.

They also called for strong national action to address climate change, which can cause malnutrition as whales’ food sources are decreased or moved, sometimes bringing whales into areas where they’re more likely to be entangled or hit by ships.

Attendees at the event sent messages to key members of Congress demanding climate action and greater protection of whales from speeding ships. They also sent messages to California Gov. Gavin Newsom and state wildlife officials asking for more support in certifying rope-less fishing gear and encouraging its use.

Blue, fin, humpback, gray and other whales migrate along the West Coast, where they are most directly threatened by vessel strikes and entanglement in fishing gear. Eleven dead whales have washed up around the Bay Area since early April, and at least four died from ship strikes. Two dead whales were also found on the hull of a military ship in San Diego last month.